71% of Americans Believe the US Economy is “Rigged” 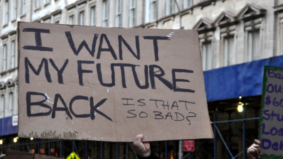 Almost three-quarters (71%) of Americans believe the US economic system is “rigged in favor of certain groups” according to a new poll by Marketplace and Edison Research.

The national survey conducted in May asked 1,022 participants about numerous aspects of their financial lives, ranging from job hunts and medical bills to the date of their most recent family vacation. The survey results produced a grim portrait of economic anxiety that is crossing class, race and political boundaries.

The most startling response to all the questions came from this one: Which of the following comes closer to your opinion on the economic system in the U.S.? People could select between the following three options:

As noted above, 71% selected the “rigged” economy. It didn’t matter much if the person was white, black or Hispanic or whether they identified as Republican, Democrat or Independent. The vast majority now believes that the American Dream comes with a huge asterisk that reads: “only for the favored few.”

No wonder the “rigged economy” has become one of the biggest talking points on the presidential campaign trail. Bernie Sanders may have started it, but Donald Trump now uses that exact term frequently, and Hillary Clinton speaks often about how she’ll help those “left behind.”

The respondents’ outlook on the current political climate were just as bleak. 75% said they were “dissatisfied” or “angry” with elected officials in Washington, while 47% were “not satisfied at all” with this year’s selection of candidates for president. Indeed, almost half of respondents believed that the choice of a Republican or Democrat for the White House would make “no difference” to their personal financial situation.

Americans have good reason to feel this way. The typical middle-class family is earning about the same amount of money today – less than $54,000 – as they did a decade ago, adjusted for inflation. This means a lot of families are earning even less.

On top of that, the Great Recession knocked out many people’s safety nets as they lost their jobs or homes or both. As I wrote on May 31 almost half of US households have less than $400 saved. Even people who have jobs said they feel just one step away from financial ruin.

Likewise as I wrote on May 3, 90% of Americans believe they are worse off today than in the 1970s. Clearly many Americans are in a dour mood as these and other stats bear out, which is not really new.

What is new is that over 70% of Americans now believe that the US economy is rigged against them. Or maybe it’s just because prior surveys (to my knowledge) have not phrased the questions to use the “rigged” language.

Whatever the reason, it’s very sad.

It will be most interesting to see how this “rigged” sentiment affects the presidential election results. If 71% of the people believe the economy is rigged against them, wouldn’t it be natural for them to ponder who rigged it? If so, that should be bad news for Hillary, but we’ll see.

46% of Americans Say They Are “Under-Employed”

Although the country’s unemployment rate of 4.7% in May is pretty close to what economists consider “full employment,” there’s another side to that story — and it helps explain why so many families are still pinching pennies just to get by.

A new study from PayScale.com found that 46% of American workers today consider themselves under-employed, meaning they are working at jobs below their academic preparation, or are working part-time because they can’t find full-time work.

PayScale surveyed more than 900,000 workers for its report. It asked them if they considered themselves under-employed, and why. About three quarters said they weren’t using their degree or training at their current job, while the remaining were working part-time because they couldn’t find a full-time job.

And many of these jobs are cases where more education might not be an asset. Although college helps, the catch is that you need to have a degree. Surprisingly, people with some college coursework under their belt but no degree reported the highest level of under-employment at 57%.

The point is, even after seven years of this so-called economic recovery, almost half (46%) of Americans say they are under-employed and thus earning less than their full potential.