America’s Huge Debt Is Not A Problem… Until It Is 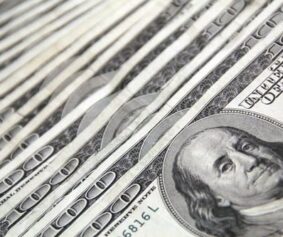 I don’t know how many of my clients and subscribers are familiar with Ken Fisher who has been a long-time, widely followed financial columnist for Forbes and the founder of Fisher Investments which reportedly manages over $110 billion in client assets. Mr. Fisher is ranked among the Forbes 400 Richest Americans.

Mr. Fisher wrote a controversial column which appeared in USA Today on Monday of this week, in which he argued that America’s enormous national debt of apprx. $22.6 trillion doesn’t matter. He certainly does not believe it will lead to a financial crisis and suggests that we simply not worry about it.

As longtime readers know, I have argued for years that our out-of-control debt will blow-up in our faces at some point and lead to a new financial crisis that could make the Great Recession of late-2007 to early-2009 look like a walk in the park. But despite my disagreement with Mr. Fisher, I’ll briefly summarize his argument below. Let’s start with the National Debt Clock: 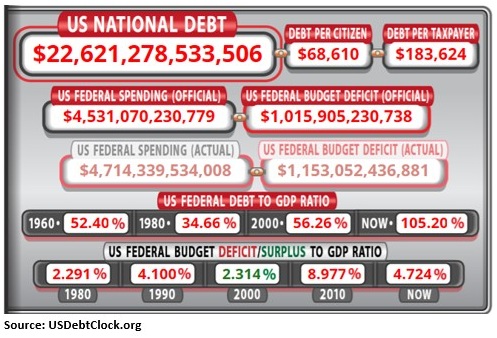 If you’ve never visited this site, you really should go there. It shows in real time, ticking multiple times every second, the total of our national debt, including the amount per citizen and the amount per taxpayer, and much more than what you see above.

As you can see, our national debt – including both “debt held by the public” and “intra-government debt” is now over 105% of GDP. That is staggering, despite what Fisher argues! Fisher begins his case by pointing out that our debt-to-GDP ratio today is lower than that of Italy and Japan, two of the most indebted countries in the world. How comforting!

Mr. Fisher then makes the tired old (liberal) argument that over one-quarter of our national debt, almost $6 trillion, is intra-government debt which, as he puts it, we owe to ourselves.  As I and others have argued for years, this debt which is owed by various government agencies to other government agencies is no different than debt held by the public.

These government-owned Treasury instruments mature and must be rolled over just like all debt securities. To say we should just ignore them and not count them toward the national debt is irresponsible, in my opinion. Without that debt, Fisher argues that the real national debt is only 76% of GDP, not 105% as shown above in the Debt Clock. This is really weak! 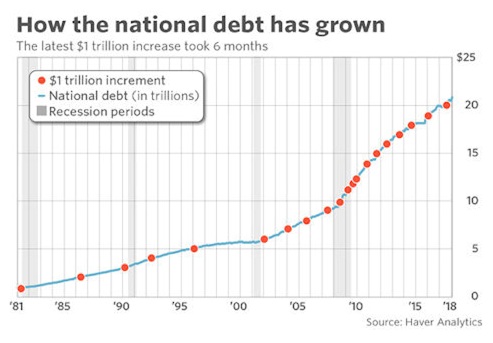 As we all know, the national debt has been rising every year for decades except for a couple of years under President Bill Clinton when he and a Republican Congress balanced the budget. The thing to notice in the chart above is the debt has been exploding since the Great Recession.

What matters, he says, is our ability to service that debt – meaning can we afford to pay the interest on it. He says: “Currently, annual interest payments [on the debt] represent just 9.8% of tax revenues, lower than any time in the 1980s and 1990s when they peaked at 18.4%. If debt didn’t doom us then, why would it now?”

Fisher has obviously drunk the liberal Kool-Aid and apparently assumes that US interest rates are going to remain at or near today’s historically low levels indefinitely. There is no reason to believe that. Today, Uncle Sam can sell 10-year Treasury notes that yield only 1.65% all day long.

But what happens when interest rates normalize and 10-year yields go up to 4%? The interest on our national debt spikes to two-and-a-half times what it is today! Mr. Fisher doesn’t address that directly.

The closest he comes is when he cites the 10-year government debt yields in South Africa and Turkey, which are 8.8% and 15.2%, respectively. He implies that will never happen in America. I guess he’s forgotten that US 10-year Treasury yields were above 14% in 1980-81.

I have been warning about the dire consequences of our exploding national debt for over 30 years, and so far I’ve been wrong. So far, Mr. Fisher has been right.

Yet history repeatedly shows that nations which run up debt to astronomical levels, as we have, always collapse at some point. People in the “we owe it to ourselves” camp like Mr. Fisher claim that this time is different. They always do.

The bottom line is: America’s huge national debt is not a problem… until it is.

Whether the US is doomed to a financial collapse or not, I believe historians will one day blame my generation, the Baby Boomers, for taking on this massive, unprecedented national debt and dooming our children and grandchildren to lower living standards and possibly less freedom.