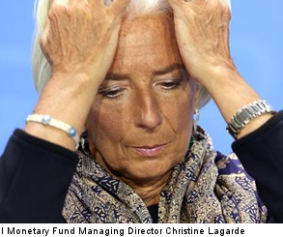 The International Monetary Fund (IMF) has downgraded its world economic growth forecast for 2016 yet again and warned of a backlash against “cross-border economic integration” (mainly the immigration crisis) in richer countries.

If you feel like you’ve seen this movie before, you have; this was the IMF’s fourth consecutive downgrade in the last year.

In its latest World Economic Outlook, the organization said Tuesday that it now sees the global economy growing by only 3.2% this year, down from 3.4% in its January forecast and down from 3.6% in its estimate in October 2015

The IMF also cut its global growth estimate for 2017 to 3.5%, down from the 3.6% forecast in January. The IMF downgraded the 2016 outlook for all major advanced economies, including the US, Canada, the euro area, the UK and Japan.

The IMF cut the 2016 growth outlook for both the euro area and the UK on Tuesday by 0.2%. The 19 economies that use the euro currency are now expected to grow by only 1.5% on average this year, while the UK economy is seen expanding by 1.9%.

The IMF now sees the US economy growing at 2.4% this year, down from 2.6% in its January forecast. Despite the downgrade, the IMF continues to believe the US economy will remain the strongest among developed nations.

The IMF further downgraded its forecasts for several oil exporting nations. Russia’s economy is now expected to contract by -1.8% this year; Brazil (in recession now) to contract by –3.8%; and Nigeria to grow by only 2.3%, down from its forecast of 4.1% in January.

Upon the release of the new forecasts, IMF Chief Economist Maurice Obstfeld warned:

“Global growth continues, but at an increasingly disappointing pace that leaves the world economy more exposed to negative risks. Growth has been too slow for too long.”

Mr. Obstfeld also warned that the EU’s open borders between member countries were also under threat due to both economic pressures and the massive influx of refugees from the Middle East:

“Continuing violent instability in a number of countries, notably Syria, continues to crater their economies, driving millions of refugees to surrounding countries as well as to Europe. This is a humanitarian disaster.

It has challenged the European Union’s capacity to preserve open internal borders and as the incidence of terrorism has increased, the strains have only grown. Coupled with other economic pressures, the result in Europe has been a rising tide of inward-looking nationalism.”

He said one manifestation of this was the possibility that the UK might vote to leave the EU in the referendum the country is holding on June 23. This would damage a wide range of trade and investment relations, Obstfeld said.

I would venture that the vast majority of Americans has no idea what the International Monetary Fund is, much less what it does. The IMF is an international organization headquartered in Washington, DC consisting of 188 countries supposedly working to “foster global monetary cooperation, secure financial stability, facilitate international trade, promote high employment and sustainable economic growth, and reduce poverty around the world.”

Formed in 1944 at the Bretton Woods Conference, the IMF came into formal existence in 1945 with 29 member countries and the goal of reconstructing the international payment system after World War II. Member countries contribute dues through a quota system to fund the IMF. As usual, the US is by far the largest contributor (over two- and-a-half times the next largest contributor).

While the IMF masquerades officially as a non-political international entity, it is in fact a liberal-leaning organization with a strong global warming agenda, among other progressive causes.

The IMF’s Managing Director, Christine Lagarde (pictured above), was a long-time corporate lawyer in France who has resided in the US since she became the head of the IMF in 2011. She was recently elected to a second five-year term.

In my view, the US should not be a member and the IMF should be moved out of the US. That won’t happen, of course.