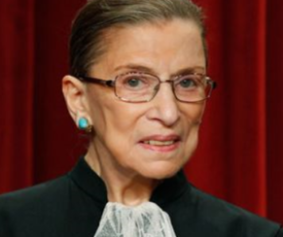 When was the last time you saw or heard a sitting Supreme Court Justice criticize a presidential  candidate, or any other politician for that matter? The answer is probably NEVER… that is until the last week or so.

For as long as I have been following politics (over 40 years), Supreme Court Justices have gone out of their way to avoid making political comments or gestures of any kind. Visualize their annual appearance at the President’s State of the Union address to Congress where the Supremes sit stone-faced and never smile or applaud. That’s just what they do.

Well, all that changed abruptly in just the last week when sitting Supreme Court Justice Ruth Bader Ginsburg lashed-out at Donald Trump on three separate occasions in interviews with the media. Even The New York Times was stunned by Ginsburg’s criticisms of Trump.

Now before I get into this discussion, let me make a couple of things clear. First, I am not a fan of Donald Trump and wish the GOP had a true conservative candidate; my choice would have been former Secretary of State Condoleezza Rice. Second, however, I will vote for Trump in November if he is the nominee. There’s no way on earth I would vote for Hillary.

Now back to Justice Ginsburg, perhaps the most liberal member of the High Court, and her shocking attack on Trump. In an interview with The New York Times published on Sunday, Justice Ginsburg said:

“I can’t imagine what the country would be — with Donald Trump as our president,” joking that if her husband were alive, he might have said, “It’s time for us to move to New Zealand.”

In an interview with The Associated Press that appeared last Friday, when asked to consider a Trump victory, she made it clear she does not even want to envision a Trump win. She said:

“I don’t want to think about that possibility, but if it should be, then everything is up for grabs.”

While Justice Ginsburg realized how controversial her comments were over the weekend, she decided to “double-down” this Monday in a CNN interview in which she said this about Trump:

“He’s a faker who has no consistency about him… He says whatever comes into his head at the moment… He really has an ego.”

As you probably know, Trump fired back as he usually does. On Tuesday of this week, he told The New York Times:

“I think it’s highly inappropriate that a United States Supreme Court judge gets involved in a political campaign, frankly. I couldn’t believe it when I saw it.”

Then later on Tuesday night, Trump took the clash between the presumptive GOP nominee and a member of the Supreme Court further into uncharted territory when he tweeted:

“Justice Ginsburg of the U.S. Supreme Court has embarrassed [us] all by making very dumb political statements about me. Her mind is shot – resign!”

As usual, Trump overreacted in my opinion. His parting line that ‘Her mind is shot – resign!’ was over the top, but that’s Trump. While Justice Ginsburg declined to respond to Trump’s latest shot, there is no reason to conclude that this very unusual public dust-up is over.

Now there is no legal requirement that Supreme Court justices refrain from commenting on a presidential campaign or any other political matter. But Justice Ginsburg’s comments show why their tradition has been to keep silent.

In this election cycle in particular, the potential of a new president to affect the balance of the Supreme Court has taken on great importance, with the vacancy left by the death of Justice Antonin Scalia. As Justice Ginsburg pointed out, other justices are nearing an age when retirement would not be surprising.

That makes it important that the Court remain outside the presidential election process. And just imagine if this were Bush v Gore in 2000 and the resolution of the election depended on a Supreme Court decision. Could anyone now argue with a straight face that Justice Ginsburg’s only guide would be the law?

The bottom line is this: Justice Ginsburg broke a long Supreme Court tradition with her criticisms of Trump. The question is, why? Here’s my take: Justice Ginsburg is 83 years old and her health is reportedly not the greatest. She will probably retire in the next few years.

It is obvious that Ginsburg does not want Donald Trump to pick her replacement on the Court. So she chose to attack him despite the Court’s tradition of staying out of politics, and it has created a huge controversy.