The “Magnetism” Of Fundamental Values 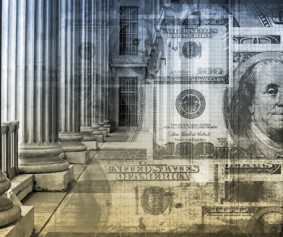 Investors Pause For The Election
Events, Not Politics, Will Dictate Policy
Many Investments Are Politically Neutral
These Stocks Look Particularly Promising
Most Blue Chip Stocks Are Still Attractive
The “Magnetism” Of Fundamental Values
With Blue Chips, Size Also Matters
The Bottom Line

This month the stock market took a breather from the post-QE3 rally we enjoyed in September. The only surprise was how mild the correction turned out to be. When the closing bell rang on October 24, the Dow and the Nasdaq were off 2.5% and 3.6% respectively.

Investors Pause For The Election

We think the uncertainty about the outcome of the presidential election on November 6 is contributing to the nervousness on Wall Street. It is widely believed that the investment climate will differ greatly depending on whether Mr. Obama or Mr. Romney wins the White House. Since the outcome of the race could go either way, many traders are staying on the bench until the votes are counted.

The concern that many investors have about the election is probably overdone. In his September newsletter, Jim Powell at the Global Changes & Opportunities Report (866-967-4267) published the core items from the Republican and Democratic budget proposals, and they differed very little.

The similar Democratic and Republican budget proposals illustrate a fact that has been true about American politics for decades: there are far greater differences in campaign rhetoric than there are in what the winners actually do when in office. That’s because the range of possible solutions to America’s most serious problems is limited.

Solving the Social Security shortfall is a case in point. Increasing the tax to support the program is a political non-starter. The same is true for cutting benefits. What remains possible is to tweak the system by increasing the retirement age by a year, reducing the cost of living adjustment, and so on. Social Security is just one of many “third rail” issues that politicians know they can’t touch without jeopardizing their reelection prospects.

There are similar constraints with U.S. foreign policy. No president can stop the chaos we are seeing in the Middle East, the expansion of China, the further development of global trade, and so on.

Despite all the bluster and threats many politicians are making, getting into another war also seems out of the question. After 11 years in Afghanistan and 9 in Iraq, the American people would never stand for it.

Many Investments Are Politically Neutral

Every big private sector trend that we can think of is also largely outside party politics. For example, the shale oil and gas that the U.S. badly needs will continue to be developed. The same is true of America’s technological advances and the success of our multinational companies. Agriculture will remain more sensitive to weather patterns than to anything Washington may choose to do. The housing industry will continue to claw its way back, and so on. It’s a long list.

The bottom line is, there is no shortage of opportunities available to investors who are wise enough to buy high quality stocks when the markets give them good prices.

One of the best industries to watch now is housing. After a five year plunge, every indicator is now starting to move back up, including the number of houses sold, house prices, and the number of new houses being constructed. None of the numbers are flying off the charts, but they clearly indicate that the industry is recovering.

Lennar (LEN) made additional gains in October and is now up 69% for us. http://finance.yahoo.com/q/bc?s=LEN+Basic+Chart Nevertheless, we think the stock has further to go, and we continue to recommend it. The stock’s P/E is still a low 13.7 that looks attractive to us.

We remain equally optimistic about America’s largest banks. America’s preeminent mortgage lender, Wells Fargo (WFC), should have an especially bright future now that housing is starting to recover. http://finance.yahoo.com/q/pr?s=WFC+ProfileWith a P/E of only 10.8 and a 2.60% yield, Wells Fargo looks like a long-term winner.

In the energy sector, natural gas looks very promising. However, you should steer clear of the producers that are suffering from low natural gas prices. On the other hand, low prices benefit Cheniere Energy (LNG) that operates natural gas shipping terminals in the Gulf Coast region http://finance.yahoo.com/q/pr?s=LNG%2C+&ql=1. The cost of building new facilities is astronomical so Cheniere isn’t currently profitable, but its day is coming.

Low natural gas prices are also helping to revitalize many U.S. manufacturers because it lowers their operating costs. One of our stocks that is positioned to benefit is Illinois Tool Works (ITW) that produces products and equipment for manufacturers in several industries. http://finance.yahoo.com/q/pr?s=ITW+Profile. ITW is up a modest 6.5% since April and seems to have much further to go. It has a low P/E of 12.6 and a 2.50% yield.

Speaking of blue chip stocks, even after the gains they made this year most valuations are still low by historical standards. For the first time in over 50 years, many multinational dividend yields are higher than long term interest rates.

We don’t think today’s attractive blue chip prices will last much longer. Because the leading companies have a long history of appreciation, investors usually bid their stocks up to levels that leave yields well below those on bonds. Only when investors are worried about the future, as they are now, do they flock to bonds that yield less than half what’s available from top quality stocks.

The “Magnetism” Of Fundamental Values

The reason that you can buy undervalued blue chip stocks with confidence is strong fundamentals pull prices up, although it can sometimes take awhile. That means patient investors who buy well-established blue chip stocks when they are cheap will usually make a profit.

Don’t worry about the possibility that the stocks may drop near-term. Proven profit generators will almost certainly bounce back, just as they have done for decades. Meanwhile, the best blue chip stocks will continue to generate dividends.

You can further increase your odds of success, and minimize risks, if you stick with the largest blue chips. Many have been around for decades and have come to resemble prosperous countries.

There is a large number of super-sized companies from which to choose. Examples include Wal-Mart (WMT) that has revenues greater than the GDPs of all but 25 countries.

Some Comparisons Between Companies & Countries
– Annual Sales vs. GDP –

Most large companies are also better managed than governments. Dishonesty is also low and almost always results in dismissal.

Put it all together and you have a strong case for buying the world’s leading companies whenever they can be purchased at attractive terms.

The glow from QE3 is rapidly fading and investors are taking a breather from their recent buying spree. Investors are also nervous about the presidential election and the effect the winner may have on Wall Street.

Fortunately, most stocks will sink or swim on their own without much influence from Washington. Trends in energy, housing, banking, agriculture and several other industries are largely immune to presidential policies.

Looking the best of all are many large blue chip multinational companies that have been around for decades, and sometimes for over a century. Prices are still attractive for most of the leading companies. Accordingly, we think long term investors should add to their accounts whenever the market gives them good prices.

The AIA “Advocate For Absolute Returns”, a publication of The Association for Investor Awareness, Inc., tracks market trends, industry news, the SEC, global trade and finance and Washington developments for you because they affect your investments. But who doesn’t? Many sources report these issues as abstract facts. We feel that’s not enough. The AIA Advocate’s job is to warn you of what’s important and how these developments translate to ground-level forces and threats that directly affect your wealth as well as your current investment opportunities. Not just information, but information you can use. Until next time…

No comments yet. Be the first!
Click here to cancel reply.