The US Economy Is Nowhere Near “Full Employment” 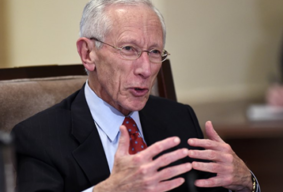 The official unemployment rate in the US has now been below 5% for four consecutive months. I mentioned in my E-Letter on Tuesday that some economists and members of the Fed believe the economy is approaching what is referred to as “full employment,” which essentially means that everyone who really wants a job can find one.  Most believe that level is an unemployment rate of around 4.5%.

But that level is dead wrong and I’ll tell you why as we go along today. To begin with the Labor Department’s official unemployment rate, currently at 4.9%, is one of the most misleading statistics in use today. In fact, it’s downright deceptive. Most notably because it doesn’t include those who have given up looking for work, such as the 8-10 million men who have mysteriously abandoned the workforce, which I wrote about on Tuesday.

INVESTOR’S BUSINESS DAILY conducts a monthly poll of American families which asks: “How many members of your household are currently unemployed and are looking for employment now?” That’s the basic definition of being unemployed. The answers IBD gets from this monthly poll are starkly at odds with the Labor Department’s official unemployment rate.

In IBD’s latest poll taken in late August, 17% of families polled said one or more people in their household had no job but were looking for one. There are just over 118 million households in the US, so at a minimum there are at least 20 million people without jobs in the country. That compares with Labor Department data showing only 7.8 million people unemployed.

Based on the latest IBD poll, they calculate that the real unemployment rate in America is 12.6%, as opposed to the Labor Department’s “official” rate of 4.9% of the workforce.

IBD is not alone in having a much higher number. GALLUP has been tracking unemployment for decades. Its “under-employment measure” which adds the government’s unemployment rate plus the share of adults who are working part-time because they can’t find a full-time job, now stands at 13.2%. GALLUP CEO Jim Clifton doesn’t mince words, calling the official US unemployment rate “The Big Lie.”

The bottom line is that we have IBD which pegs the real unemployment rate at 12.6% in August, GALLUP which puts it at 13.2% and the government’s own U-6 gauge at 9.7% — versus the official U-4 rate of only 4.9%. If we add up the three more accurate measures, we get an average unemployment rate of 11.8%, more than double the rate the government wants us to believe.

Keep that in mind each time you hear the official unemployment rate on the first Friday of each month. The point is, the US economy is nowhere near “full employment” and may never be in many of our lifetimes. In fact, it’s not even close.

On Tuesday of last week, Fed Vice-Chairman Stanley Fischer made the unequivocal statement that the US job market is “very close to full employment,” so several interest rate hikes would be in order. He called for two Fed Funds rate hikes before the end of this year.

So when you hear supposed experts like Fischer and others claim that the economy is near full employment, and that interest rates need to rise ASAP, be sure to keep in mind that they either don’t know what they’re talking about… or they’re just lying.

On a final related note, the American people are not stupid, especially when it comes to trusting government statistics such as the Labor Department’s official unemployment rate. According to a new survey by Rutgers University, 57% of Americans believe the real unemployment rate is significantly higher than the 4.9% the government would have us believe.

2016 has been a pretty chaotic year for stocks, and with a Fed rate hike looming, this could continue through the rest of the year and into 2017. In addition, we are past due for a significant market correction. Remember, the last one in late 2007-early 2009 when the S&P 500 plunged over 50%. Given that, now may be an ideal time to consider Halbert Wealth Management’s Alpha Advantage Strategy.

The beauty of Alpha Advantage combines multiple proven strategies so that it can make money whether the markets go up or down. Alpha is either in cash, 2X long or 2X short. So no matter what happens going forward, you have the potential to make money, even if the markets tank. While there are no guarantees that Alpha’s signals will always be correct, its past track record, which you can see here, is very impressive.

Next Thursday, September 15th at noon (CST) we will be featuring a live webinar with Paul Montgomery, Alpha’s Trading Manager, to discuss how the Alpha Advantage Strategy works and give you an opportunity to ask any questions you have. You can sign up for it here.

I definitely think you should give Alpha Advantage a serious look, especially if you are searching for a strategy that can do well no matter whether the markets are going up or down. The minimum investment is only $50,000 and all accounts are held at Guggenheim. Sign up for the webinar to learn more or call us at 800-348-3601.