US Economy Slowed In 3Q, As Did Consumer Confidence 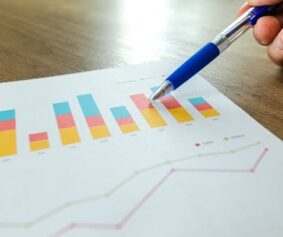 The US Commerce Department released its first estimate of 3Q Gross Domestic Product (GDP) yesterday morning. GDP is the sum of all goods and services produced in the US annually. The advance report showed 3Q GDP rose by a better than expected 1.9% (annual rate), down slightly from 2.0% in the 2Q and 3.1% in the 1Q.

This is one of those government economic reports that can be viewed as positive or negative depending on your perspective. Obviously, the 1.9% reading in the 3Q can be seen as a negative in that growth continued to slow in the quarter ended September. On the other hand, it was positive in that the number beat expectations.

We should keep in mind, of course, that this is the advance estimate which will be revised two more times, at the end of November and again at the end of December.

The main takeaway from yesterday’s report is that US consumers continue to drive the economy – to the surprise of the mainstream media. And why not? Jobs are plentiful with the unemployment rate near a 50-year low. There are more unfilled job openings today than ever before. And incomes are rising steadily after stagnating for the last decade or longer.

While that is the good news, there are reasons to be concerned about the mood of US consumers, as I will discuss below.

Consumer confidence slipped this month, surprising economists who expected it to tick higher. The Conference Board’s Consumer Confidence Index fell for the third consecutive month, from an upwardly revised figure of 126.3 in September to 125.9 in October. The pre-report consensus among forecasters was for a rise to 128. 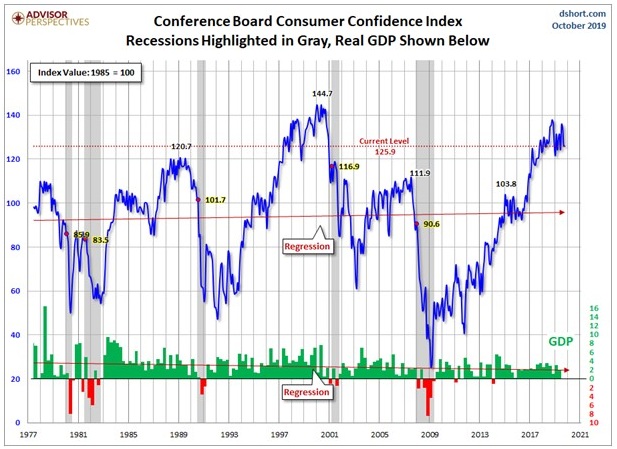 As recently as a year ago, the Consumer Confidence Index hit an 18-year high of 137.9. Yet consumers are increasingly worried about the US/China trade war and the constant media drumbeat that a recession is just around the corner – even though the US unemployment rate is at a 50-year low.

Following a similar path, the University of Michigan’s Consumer Sentiment Index for October also came in up modestly from September at 95.5 but was still down 3.1% from a year ago. In this survey as well, most consumers said they were concerned about the trade war with China and were uncertain about the economy over the next six months to a year.

As I have argued recently, I think US consumers are too preoccupied with the US/China trade war, which may be largely settled soon – trade talks are underway as this is written. I also believe consumers are overly influenced by the mainstream media’s (and the Democrats’) obsession that a recession is just around the corner.

But here’s the thing: US consumers continue to spend despite these concerns. This tells me that consumers increasingly don’t trust the media. That’s a good thing!

As was widely expected, the Fed Open Market Committee cut the Federal Funds rate range by 0.25% to 1.50%-1.75%. As was also expected, the Committee altered the language in its policy statement to suggest, indirectly, that the new rate range would likely stay in place indefinitely unless economic conditions change materially.

In his post-meeting press conference, Chairman Powell further advanced the argument for no further changes in rate policy just ahead by saying he thinks interest rates are now in a “good place” and that the current level is likely to “remain appropriate.”

I continue to believe the three Fed rate cuts this year were done to fight the inverted yield curve, rather than out of concern that the US economy is sagging, as Powell and others at the Fed have suggested. Lowering the short-term Fed Funds rate can have the effect of normalizing the yield curve over time.

In any event, it looks like the Fed is done raising or lowering rates for the balance of this year and maybe longer, unless something significant changes.