How The US Stock Market Usually Decides Our Next President 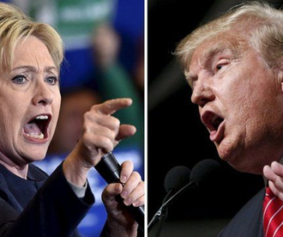 For an idea of how the presidential election will turn out, the action of the US stock market in the months just prior to the election has been an impressively accurate indicator over many years. Here’s how…

Since 1928, US equities have correctly signaled who will win the White House – incumbent or challenger – 19 out of 22 times, according to data compiled by Strategas Research Partners LLC and Bloomberg.

Specifically, when stocks are higher in the months before the vote, the sitting/incumbent party has won 86% of presidential elections. In today’s market scenario (record highs), that would be Hillary.

Yet if stocks move lower in the months before the vote, the challenger party has won a similar percentage of elections. In this case, that would be The Donald. Take a look at the chart below.

In the 36 years from 1976 to 2012, through 10 presidential elections, the stock market correctly predicted the outcome every time, with one exception. The one exception was in 1980 when the market went up 6.7% in the three months before the election, yet Ronald Reagan trounced incumbent Jimmy Carter.

And remember, this stock market indicator has been correct 19 out of 22 times since 1928. I think it’s safe to say that you’ll be watching the market closer than usual in August, September and October! I know I will.

As an example of this phenomenon, President Obama clearly benefited from the stock market’s gyrations during his two runs for the presidency. In 2008, as the representative of the challenging Democratic Party, he won the White House at the expense of stock investors: the S&P 500 Index fell almost 20% in the three months leading up to that election.

Four years later in 2012, the S&P 500 gained 2.5% in the three months leading up to the election and Obama, then the incumbent, won re-election.

People differ on why this particular indicator has been so reliable, but to most analysts it’s a matter of influence flowing from the economy to the market and thus into the minds of voters. With the S&P 500 Index at a record high today, that’s good news for Hillary Clinton – though a lot could still go wrong in the market before November.

The stock market is somewhat a mirror of the economy and the incumbent is at an advantage when it’s relatively healthy. But I don’t think many Americans believe this sub-2% economy is healthy.

Case in point, in the latest Rasmussen poll (July 14), only 21% of Americans believe the country is headed in the “right direction” – a three-year low – while 69% believe we’re on the “wrong track.” This statistic which I have quoted for many years suggests that Trump could have a chance this year even if the stock market continues higher.

The degree to which stock markets either cause, or are at least associated with, a certain political outcome should be of concern to both candidates this year since the market is totally out of their control.

Ms. Clinton may currently have a slight edge in some of the polls and a strong edge when it comes to her political organization and proven fundraising. But if stocks turn down sharply in the final months of the race, Trump may end up being just as happy as investors who bought put options on the S&P 500.

But lately, anyone betting against the broader market with puts is no doubt frustrated by the market’s resilience in the face of lots of apparent bad news, including a rash of terrorist attacks in Europe and the US and the recent Brexit vote in the UK.

In closing, I have no idea how this year’s election will turn out. As we went into this week’s GOP convention, Clinton’s former double-digit lead had shrunk to only +2 or tied. Normally, we would expect Trump to get a “bump” of 5-6 points following his convention.

Then we would expect Hillary to get a bump of 5-6 points from her convention. If so, it’s tied or very close again. In that case, it really could come down to what the stock market does in August, September and October. We’ll see.